On the tram between Liberec and Jablonec 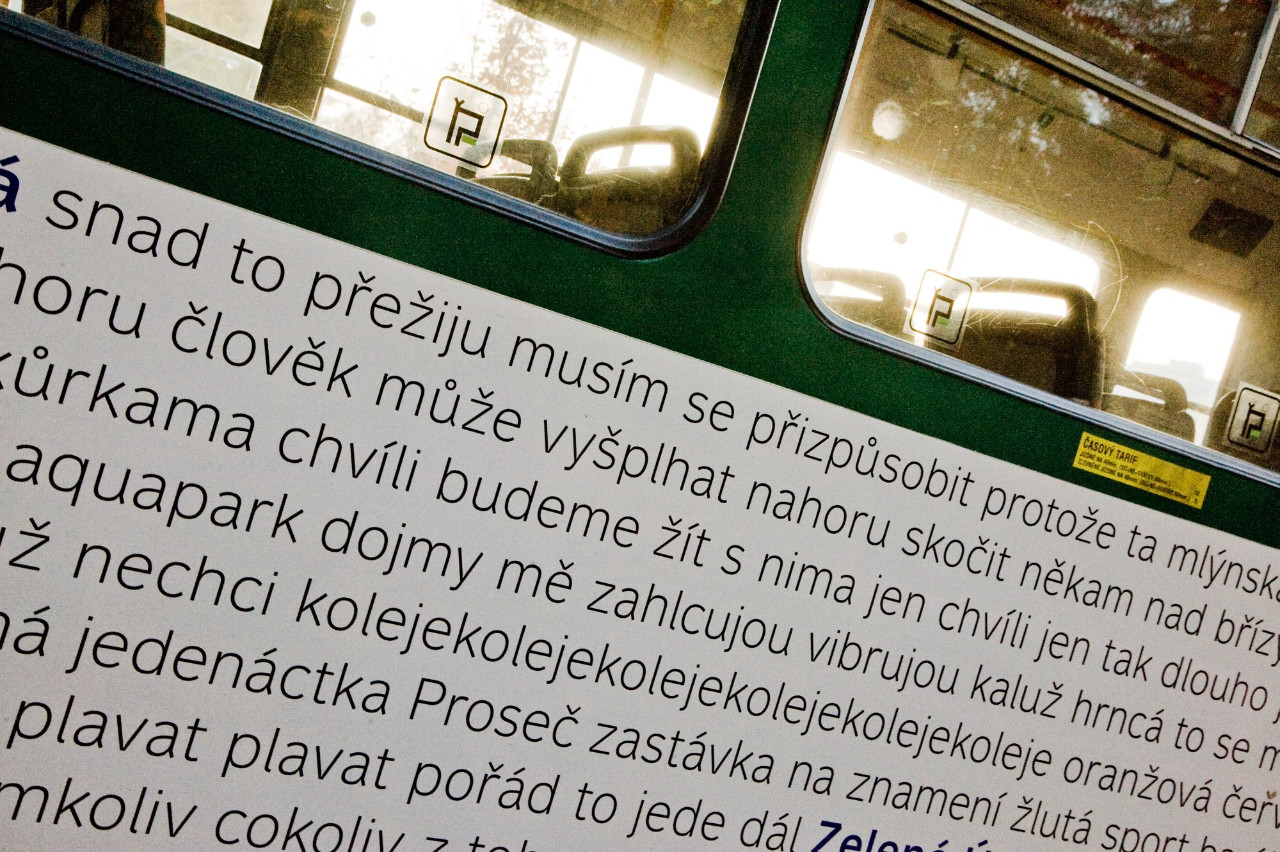 I worked on the poetic cycle Tramvestie for approximately a decade, from 2006 to 2016. The idea occurred at the now closed Small Exhibition Hall in Liberec, during a conversation with my friend, the gallery manager Jaromír Typlt. Jaromír said that it would be good to somehow capture the atmosphere on the remarkable tram line between the towns of Liberec and Jablonec: the terrific narrow-gauge railway, surrounded by a landscape that has undergone numerous dynamic transformations, a town’s disintegration into villages and woods, the wild re-assembling of the picture into a urban form. Jaromír and I were fascinated by the chaos reigning in the region, the remnants of old German factories, the gardens with hens, rusty water pumps, coloured garage doors, a picturesque rivulet crawling into dilapidated head-water channels, the spooky dense forest, in which the passengers of the passing tram can spot a deer or a mushroom picker – and so on, and so forth. As I found the idea quite compelling, I soon embarked upon giving an account of the life on and around the tram line. Now and then, I urged some of my friends or acquaintances to get on tram No. 11 – then I switched on my recorder and asked him or her to describe or anyhow reflect on the journey and the landscape outside, or just talk about whatever crossed their minds. Some of them were closely familiar with the surroundings, others only knew the vicinity vaguely. The recordings made on the tram then served for me as the basis for a series of texts, yet I perceived the captured conversations as a mere verbal “storehouse”, an associative guidance. I went on to shorten, extend, rhythmicise, modify, shift, or colour in some of the recorded texts, while in some cases I left the dialogues and monologues as they were, yet I always strove to create a textual essence of the people talking and the landscape alike.Initially, I was just writing the poems based on the recordings for myself and for those I had recorded. I rolled the texts into long scrolls, pasted them on the houses of my friends, unwound them and presented their contents at reading sessions. 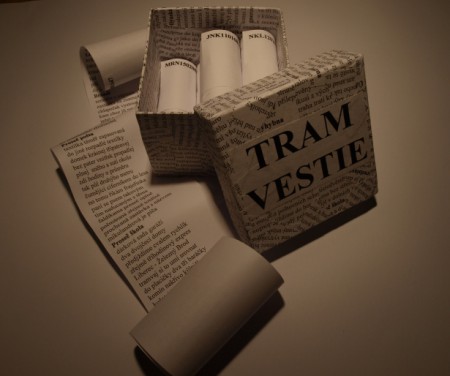 Consequently, Tramvestie has been made public in many forms and versions, with the texts even having been included in a number of literature magazines and translated into other languages – the whole matter simply started to live a life of its own. And I wondered where it was proceeding, where the “tram virus” was spreading. The graphic artist Jan Měřička, who at the beginning independently of my own activities, began exploring the tram line in visual terms, undertook my texts and helped me transform them into various verbal objects: one of the outcomes was that in 2012 the strips were installed directly on/in a tram car, which, adorned by them, has ever since been running on the Jablonec-Liberec route. In 2016, Protimluv published Tramvestie as a book, with Jan Měřička’s exquisite graphic layout.

The volume captures 10 plus 10 opposite journeys made by different speakers, and also a disc with the eponymous radiophonic composition which I have edited from the original recordings and other audio materials for Czech Radio (in 2012, it was first broadcast by the Vltava station). In all its media forms, Tramvestie primarily represents for me a close contact with the language and its mission: the language defines the world around us, describing it, creating an image. Any depletion, any reduction of the language diminishes our ability to find our bearings, obscures the landscape, breaks the picture. Every new recording of a tram journey, every insight into someone else’s vocabulary thus creates something that could be called a “bright verbal shaft”, verbal tunnelling forwards. And every new recording makes the picture of the fascinating journey more refined, more plastic in time and space alike. 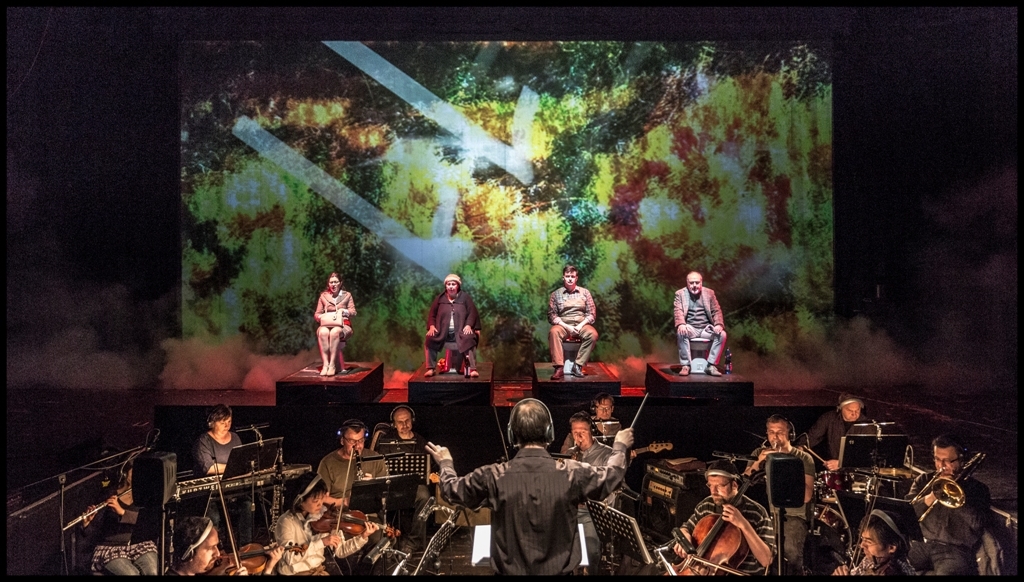 A few years ago, I was contacted by Petr Wajsar, who expressed the wish to set Tramvestie as an opera. His idea flabbergasted me. It also served as definitive proof that the cycle truly lived independently of me, that it was heading somewhere, that I had no chance to steer its trajectory. I gladly agreed, although it was clear that I would not have full control of the result. The bulk of the work is, naturally, done by the composer, yet the outcome is also largely affected by the intricate theatre machinery, the stage’s visual design and dynamics, with the actual text only being one of the components of a complex whole. Petr asked me to write the libretto, to transform the tram-journey composition into a form befitting the stage. Presently, we came across an elementary problem, which rested in the fact that it was not easy to transfer the fragmentariness, volatility and multi-perspective nature of Tramvestie into the conventional dramatic arch, arriving at the conclusion that any traditional storyline would even be at variance with the original cycle. Another problem was that the original audio recordings consist of a deluge of words, a torrent of parallel images, which, unlike the reader, the listener or spectator would not be capable of absorbing. When writing the libretto, I closely collaborated with Petr Wajsar and the dramaturge Ondřej Hučín. My endeavour was to create something integrated, yet also sufficiently loose and open, something that would not constrain the composer, nor the other creators. Accordingly, I decided to replace the dialogue with a processual line, or, to be more precise, with that which does not have the form of relations and dialogues between the protagonists, but takes place within their seemingly isolated talks, as mutual combinations, variations of words and rejoinders. After considering the technical terms, we reduced the original high number of speakers to four: two women and two men. Their characters and vocabularies were rather loosely inspired by some of those captured on the recordings (see the book Tramvestie). We basically aimed to depict four different fundamental traits, which could be approximately defined as: 1) weariness, introversion, neurosis, 2) homeless persons’ knowledge of every corner of the landscape, being battered by life, 3) vitality, understanding the local industrial business, and 4) glumness, even spite, knowledge of the landscape’s structural and technical aspects.

At the beginning, monologues totally independent of each other unfurl (if we leave aside the chorus passages by the former Textilana factory workers, the Pharmacy, etc.), yet they gradually linguistically blend together. During the course of the journey, the process gets ever more palpable, occasionally corresponding with the names of the stops: “Vratislavice” indicates that which will take place there, that is, certain returning, or even turning of words and lives. The stop called “Proseč” is the first evident point of intersection of the speakers, while there are three such intersections (Proseč Post Office, Proseč School and Turnout). Subsequently, the protagonists pass through the “Nový Svět” (New World), and the greater their distance from the town and the nearer they get to the forest, the more markedly do their initially linear characters – in accordance with the surrounding nature – turn inside out, revealing things that previously remained concealed. To put it simply: the neurotic suddenly perks up; the weary decrepit person manifests uttermost resilience, recalling his childhood; the vigorous person turns to a lamenting broken being; the dry technocrat opens up, ceases to complain, and even recalls his youth and being in love. The entire transformation is based on the four voices’ getting together without knowing about it, on their repeating and paraphrasing that which the other commuters had previously uttered in a different context. There is no escape from the shared “landscape of words”: the only option is to face a variety, perhaps an infinite number, of combinations; yet we are defined by the landscape we see around us, as well as by the words we use to map the landscape. At the “Měnírna” (“Converter Station”) stop, still in deep woods, all the permeations and transformations gradate. The next stop is “Brandl”, on the outskirts of the other town – and all the four passengers reassume their original verbal stereotypes or put on their masks again before getting off the tram: they are the same as when they got on. I handed over the text to Petr Wajsar and Marek Bureš as a – more or less – basic framework for the music and visual composition. I also handed over the radio version of Tramvestie and the complete archive of the original “raw” recording of voices. I refrained from being a capricious troublemaker, a vainglorious (still living) author, who would obstinately cling to all the details of his fixed idea and sit tight. I drew upon the fact that Tramvestieis principally a phenomenon that I have never had for myself only, that it is something everyone can, and should, interpret from their own perspective. And I am still astonished as to how far the original obsession, the eager pasting of paper strips and tram shuttling have got.